About Versus Sports Simulator 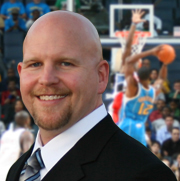 Steve Pugh is the designer, creator, and publisher of “Compughter Ratings”, an advanced mathematical model used to rate sports teams in various competitive sports. The model uses a "least squares" method to generate initial ratings estimates and then employs a "maximum likelihood" technique to produce the final ratings.

Pugh holds Bachelor’s and Master’s degrees in Mathematics from Virginia Tech and is a member of the Pi Mu Epsilon National Honorary Mathematical Society. He is currently employed as a Senior Manager in Information Technology at Capital One Financial and has over 27 years of experience in the IT field.

Pugh's research in the field of mathematics began in 1994 when he worked as a Research Assistant at the Interdisciplinary Center for Applied Mathematics in Blacksburg, Virginia. Under the direction of Dr. John Burns and funded by the U.S. Air Force Office of Scientific Research, Pugh published Finite Element Approximations of Burgers' Equation in September, 1995.

Pugh's interest in computer-generated sports ratings began in 2005 as a culmination of hobbies: sports, mathematical modeling, and computer programming. The initial objective was simply to gain insight into the mathematical techniques utilized to rate the past performance of college football teams. In early 2006, Pugh began leveraging the generous expertise of Kenneth Massey (www.masseyratings.com) to help shape his ideas and sharpen his techniques. Mr. Massey is also a graduate of the Mathematics Department at Virginia Tech and his computer ratings model was used in the Bowl Championship Series (BCS) during its entirety.

Scores data is provided by through the generous courtesy of: